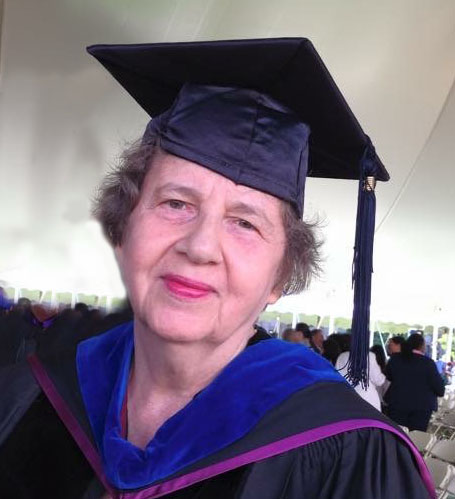 On Wednesday, January 20, 2021, Bronx Community College (BCC) lost a pillar of our institution with the passing of Dr. Ruth Bass. For 55 years, Dr. Bass taught thousands of students in the Department of Art and Music and developed the careers of the many educators who worked with her and followed in her footsteps.

Her love of her students was the inspiration for the Harvey L. Bass Memorial Fund several years ago. Named in honor of her late husband, the fund has provided awards to talented Art and Music students. It was her way of celebrating and encouraging the aspiring artists she served so well. Now, as a tribute to her life and lasting legacy, the fund will be renamed the “Ruth & Harvey L. Bass Memorial Fund.”

The following is an edited reprint of her BCC story as shared in the “UPDATE” newsletter in 2020.

Dr. Bass began teaching at BCC’s old location in the former Bronx High School of Science building. By the time the College moved to the University Heights campus in 1973, she was an assistant professor. She rose through the ranks for the first half of her career, becoming the department chair in 1995.

During the 25-year tenure as department chair that followed, Dr. Bass totally transformed not only the Art and Music department but also the entire cultural life of the campus.

One of her first achievements was developing what is now a nationally respected digital design program. “It’s considered one of the best among non-profit schools,” says Dr. Bass. “Little by little, by hiring people who were talented and dedicated, we really built it up.”  One of those hires was Lisa Amowitz, now Director of Digital Design

The entire campus benefitted from some of Dr. Bass’s initiatives. The Hall of Fame Art Gallery in Bliss Hall now boasts a robust calendar of exhibitions by professional and student artists.  ”We developed an internship program at the Gallery. The person who gets credit for that is Mary Jo Ben-Nun,” says Dr. Bass (as always generously crediting the work of the staff she created).

Meanwhile, Dr. Bass has enjoyed a separate career as a painter and art critic.  “I do portraits that are very realistic but also show the inner feelings of the person. I had a series called ‘Portraits of Women’ that was shown at the College. As a critic who wrote many hundreds of reviews, Dr. Bass applied the same standards she taught her students to consider when looking at works of art: “The subject matter, the use of the medium, the emotional impact.”

The people of Bronx Community College remain her fondest memory of the College she served. “I love the students. They’re excited about learning. And over the years I’ve appreciated the dedication of everyone at BCC, not just the teachers but on every level: PPS, Public Safety, office workers, administrators, the adjuncts who have to run to another job to make ends meet. They really know how important this experience is.”

Ruth Bass has no greater admirer than its president. “Dr. Bass dedicated her entire professional life of five decades plus to our College and students,” says President Thomas Isekenegbe. “This is a rare feat in academia and we are grateful to Dr. Bass for her commitment and service to our community.”

At Bronx Community College, we invest in the success of all of our students.