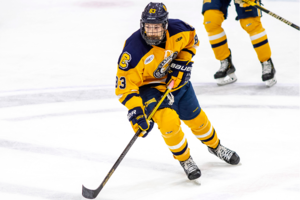 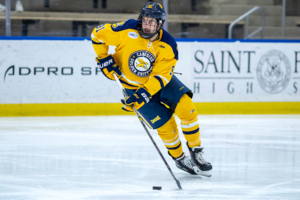 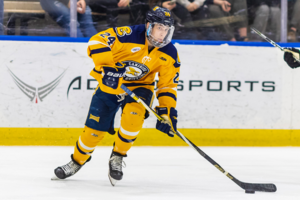 The 2018-19 campaign saw several remarkable achievements that became part of the history books for Men's Hockey!  The team earned three victories against nationally ranked opponents including #11 Clarkson, a 2019 NCAA Tournament participant and of course, the historic sweep of perennial national power #13 North Dakota in the LECOM Harborcenter.  Six members of the Class of 2019 signed contracts to play professional hockey at the conclusion of the 2018-19 season and Senior, Dylan McLaughlin was ranked among the leaders in Atlantic Hockey in both points and goals scored.  He was named First-Team All-Conference for a second year in a row and won The Atlantic Hockey Association Individual Sportsmanship Award.  On March 13th, 2019, Dylan signed a two-year contact with the Rockford Ice Hogs affiliate of the Chicago Blackhawks!

Our alumni, family and friends made it possible for the team to accomplish what we did in 2018-19. The current season is underway and the team is hungry for more! All of our successes last year were possible because of the donors and fans who supported the program last year, helping to provide the resources our team needed to excel on the ice and in the classroom.

Your gift in support of this campaign will:

Canisius College is the premier private university in Western New York, one of 28 Jesuit, Catholic colleges in the nation, and is consistently ranked among the top regional colleges in the Northeast. Founded in 1870 by German Jesuits, Canisius College is named for St. Peter Canisius, a renowned Dutch educator and one of the original members of the Society of Jesus. What began in a single building in downtown Buffalo now consists of 56 buildings located on 72 acres in a residential neighborhood in North-Central Buffalo.